within some sample space S. Suppose

is the event of owning a cat and

is the event of owning a dog. Our Venn diagram might look something like the following for a sample of 450 pet owners.

In other words, out of a sample of 450 pet owners,

Obviously, the probability of owning a cat,

is much higher than the probability of owning a dog,

as cats are the superior animal. We can also estimate the probability of being one of those people with neither a cat nor a dog as

Now, suppose we select a cat owner at random. What is the probability that they are also a dog owner? Well, since we know the individual is a cat owner, we only need to focus on the left hand bubble of our Venn diagram. 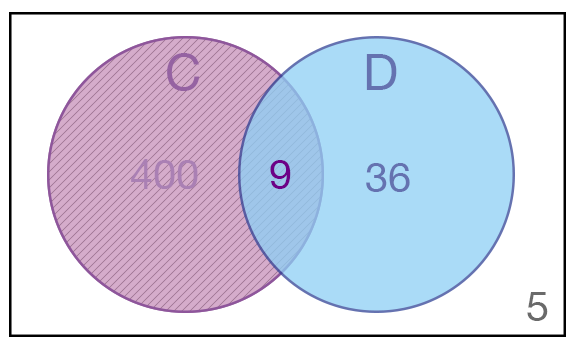 The number of individuals of interest to us is therefore 409, which we will denote

are within the intersection (denoted

. The relevant probability can therefore be estimated as,

In general, for two events

can be represented as

This is exactly the formula we were using for the cats and dogs example,

We often use conditional probability in our everyday lives without thinking about it. For example, if you tested positive for an extremely rare disease, you should be thinking that the test is likely inaccurate rather than you have the disease… or maybe not because you might be freaking out right now. However, your doctor should be! As a result, your doctor would send you for further testing.