My previous two blog posts revolved around derivation of the limiting distribution of U-statistics for one sample and multiple independent samples.

The notation within these derivations can get quite complicated and it may be a bit unclear as to how to actually derive components of the limiting distribution.

For a single sample,

, the U-statistic is given by

is a symmetric kernel of degree

For a review of what it means for

to be symmetric, check out U-, V-, and Dupree Statistics.

, so we can re-write

Alternatively, this is equivalent to,

The limiting variance of

, these expressions reduce to

The limiting distribution of

, the two-sample U-statistic is given by

is a kernel that is independently symmetric within the two blocks

The limiting variance of

, these expressions reduce to

The limiting distribution of

.
We wish to estimate the variance, which can be expressed as an expectation functional,

In order to estimate

using a U-statistic, we need to identify a kernel function that is unbiased for

and symmetric in its argument. We start by considering,

but is not symmetric since

Thus, the corresponding symmetric kernel can be constructed as

Here, the number of arguments

is the set of all permutations of the

Then, the symmetric kernel which is unbiased for the variance is,

An unbiased estimator of

Focusing on the second form of the sum and recognizing that 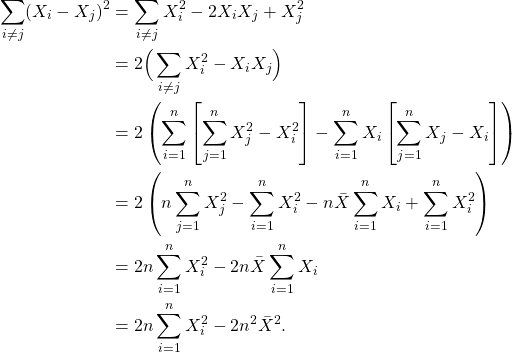 Plugging this simplified expression back into our formula for 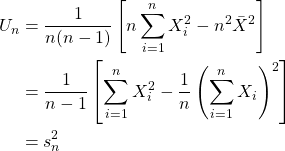 It is well-known that

is the unbiased estimator of the sample variance such that,

but what about the variance of

? For a sample size of

To derive the first variance component

, we start by taking the expectation of our kernel conditional on 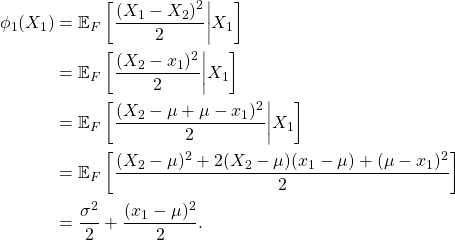 is just equal to the variance of

is just a constant, we have

is the fourth central moment.

by definition so that,

To simplify the remaining expectation, recall that,

Substituting this back into our expression for

Finally, plugging our two variance components into our expression for

Then, our asymptotic result for

bivariate, continuous observations of the form

A pair of observations,

is considered “concordant” if

The probability that two observations are concordant is then,

and the probability that two observations are discordant is then,

and is used as a measure of the strength of monotone increasing/decreasing relationships, with

Based on our definition of

, the form of the symmetric kernel is immediately obvious,

is an indicator function taking the value

when its argument is true and

so that our kernel may be re-expressed as,

This will come in handy later.

Now that we have identified our kernel function, we can construct our U-statistic,

It is obvious that

and the variance of

For the purposes of demonstration and to simplify derivation of the variance components, suppose we are operating under the null hypothesis that

are independent, or equivalently

To find our first variance component

, we must find the expectation of our kernel conditional on

Then, the first variance component is given by,

are independent random variables distributed according to

are both distributed according to

are independent, applying the identity

The same is true for

Plugging our results back into our equation for

are identically distributed and continuous, either

we need. That is,

The same arguments hold for

under the null hypothesis,

Now that we have determined the value of

under the null hypothesis that

are independent, we can plug these components into our formula for

Our asymptotic result for

Suppose we have two independent random samples of size

We wish to compare the means of the two groups. The obvious choice for our kernel is,

and our corresponding U-statistic is,

Based on our previous derivation of the distribution of two-sample U-statistics, we have

For the first variance component, we need to take the expectation of

conditional on a single

Similarly, for the second variance component, we need to condition on a single

are just constants, it is easy to see that,

Finally, plugging these variance components into our formula for

, we obtain the variance we would expect for a comparison of two means,

Suppose we have two independent random samples of size

are continuous so that no tied values are possible. Let

represent the ranks of the

Then, the Wilcoxon Mann-Whitney (WMW) rank-sum statistic is,

. That is, we can re-express the WMW statistic as,

by the total number of

is commonly referred to as the probabilistic index.

Our previous work tells us that

can be expressed as,

Recall that covariance can be expressed in terms of expectation as,

, it should be clear that we have

Under the null hypothesis

have the same (continuous) distribution so that either

Similarly, there are 6 equally likely orderings of

, plugging these values into our expressions for

In summary, our multiple-sample U-statistic theory tells us that under the null hypothesis

2 thoughts on “One, Two, U: Examples of common one- and two-sample U-statistics”