The CDF is naturally estimated by the empirical distribution function (EDF)

I’m not saying naturally to be a jerk! I know the feeling of reading proof-heavy journal articles that end sections with “extension to the d-dimensional case is trivial”, it’s not fun when it’s not trivial to you.

being less than some threshold

, as the proportion of observations in our sample less than or equal to

as the derivative of

is just a collection of mass points and is not continuous. Instead, lets consider a discrete derivative. For some small

This can be re-expressed as

(draw a picture if you need to convince yourself)! Simplifying further, 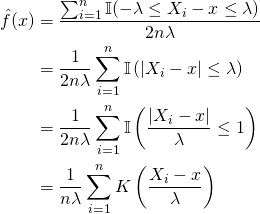 is the uniform density function on

From our derivation, we see that

essentially determines the number of observations within a small distance,

dictates the size of the window for which

are considered. That is, the bandwidth controls the degree of smoothing. The greater the number of observations within this window, the greater

is a special case of what is referred to as a kernel estimator. The general case is

is a kernel function.

is any function which satisfies

The kernel function acts as our weighting function, assigning less mass to observations farther from

. This helps to ensure that our fitted curve is smooth.

. The Gaussian, or Normal, distribution is a popular symmetric, non-negative kernel.

The moments of a kernel are defined as

The order of a kernel,

, is defined as the order of the first non-zero moment. For example, if

is a second-order kernel and

Other popular kernels include the Epanechnikov, uniform, bi-weight, and tri-weight kernels. The Epanechnikov kernel is considered to be the optimal kernel as it minimizes error. Choice of the bandwidth, however, is often more influential on estimation quality than choice of kernel.

As noted above, the bandwidth

determines the size of the envelope around

and thus the number of

used for estimation. In the case of a Gaussian kernel,

would translate to the standard deviation. For k-nearest neighbours,

The infamous bias-variance trade-off must be considered when selecting

. If we choose a small value of

, we consider a smaller number of

. This results in higher variance due to smaller sample size but less bias as each

will be closer to

, our window size increases and we consider a larger number of

. This reduces our variance but our bias will now be higher as we are using

that are further from

and thus information that might not be particularly relevant.

In other words, if

is too large we will smooth out important information but if it is too small, our estimate will be too rough and contain unnecessary noise. Choosing

is no easy task and several methods for bandwidth selection have been proposed including cross-validation methods, rules of thumb, and visual inspection.

Personally, I prefer to use cross-validation as a starting point since I try to minimize the effect of my own biases on estimation. However, these methods aren’t perfect and if feasible, I will follow this up with visual inspection to ensure that the CV bandwidth makes sense in the context of my data and problem. I will generally select a slightly rougher fit over a smoother fit as it is easier for the human eye to imagine a smoother fit than a rougher fit!

Properties of the Kernel Density Estimator

I will be extending the kernel density estimator to kernel regression in my future blog posts and conducting a case study in R that uses these methods, stay tuned!